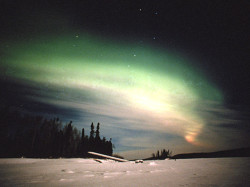 Canadian’s thawing out from a bitter ice storm may get rewarded with shimmering northern lights in the next couple of days.

The University of Alaska’s Geophysical Institute predicts much of Canada and the northern fringes of the U.S. should be able to see the northern lights. Chicago, Boston, Cleveland, Seattle and Des Moines might see the shimmering colours low on the horizon.

U.S. federal space weather forecaster Joe Kunches said the sun shot out a strong solar flare late Tuesday, which should arrive at Earth early Thursday. It should shake up Earth’s magnetic field and expand the Aurora Borealis south, possibly as far south as Colorado and central Illinois. He said the best viewing would probably be Thursday evening, weather permitting.

The solar storm is already causing airline flights to be diverted around the North Pole and South Pole and may disrupt GPS devices Thursday.

The aurora borealis is also called the northern lights since it is only visible in the North sky from the Northern Hemisphere. What you see is a bright glow observed in the night sky, usually in the polar zone.  The aurora borealis most often occurs from September to October and from March to April.